I’ve heard this saying for years and because of a recent event was curious, so I looked up the source. Voltaire is credited with coining this phrase, or one very much like it, back in the 1700’s. Voltaire was many things, and I particularly admire his beliefs on freedom of speech and religion. However, there is one thing he definitely was not.

He was not a plumber.

Yesterday we discovered a leak under the sink in our kitchen, a steady drip from the pipe supplying cold water. With my lack of flexibility and deteriorating eyesight, I could barely reach the shut off valve at the back of the counter and couldn’t focus well enough to see what needed to be done to repair the leak. When closing the valve didn’t work, we called a plumber and he referred us to another one who could come that day. The plumber arrived at seven p.m. and was finished by eight.

I was completely satisfied with his work; he recognized the problem immediately (something called a shark bite fitting that he said was prone to eventual leaking), removed the non-functional fitting, soldered a new fitting into place, reassembled the jungle of pipes and hoses, tested his work, and was on his way. The bill was less than $80.00, which I was willing to pay because first, he knew what to do, and second, he knew how to do it. 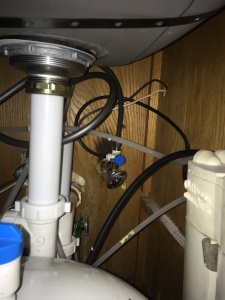 A plumbing system’s task is to contain water and route it to the appropriate areas of the house for use as needed by the owners. An imperfect plumbing system is not only irritating and potentially useless, but damaging to the structure of the house if left unrepaired. In this case, perfect is not the enemy of good; it’s the only condition that is good.

There are lots of areas in which perfect is the enemy of good; if I tried to write the perfect sentence before I moved to the next one, I would never be able to complete any of my books. If I enjoyed shopping (which I do not) the search for the perfect pair of jeans would be doomed to failure, given the variety of brands and styles available. Those charged with governing our communities, states, or nations can write good laws; if they tried to write perfect ones, they would never get anything done. Last evening I did a good job of mowing the yard, but not a perfect one. And so on.

It’s an easy temptation to err in either direction; to require perfection in areas where good is the correct and sensible goal, and to settle for good when perfection is necessary. There aren’t many things in my life that need to be perfect, but plumbing is definitely one thing that does.